Chanukah is kind of like the county fair. BBQ beef, the opportunity to win prizes, and a celebration of freedom in the best way we know how- eating fried stuff. On Chanukah, we celebrate the Maccabees beating the Greeks (‘mericans love a good fight), and the Temple menorah burning for eight straight nights (fireworks). In the spirit of the holiday, I decided to heat up my skillet and make you folks some latkes. Latkes are an ambitious undertaking for anyone, especially for those living in under-ventilated apartments. But, one bite of these golden fried latkes will make it all worthwhile. Grab your buds, grab some brews and get ready for a star-spangled fight, cuz it’s Latke Night in America. 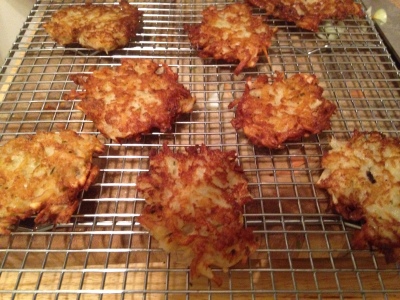 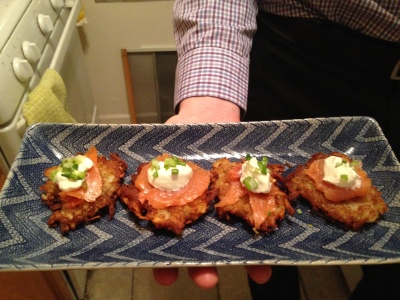 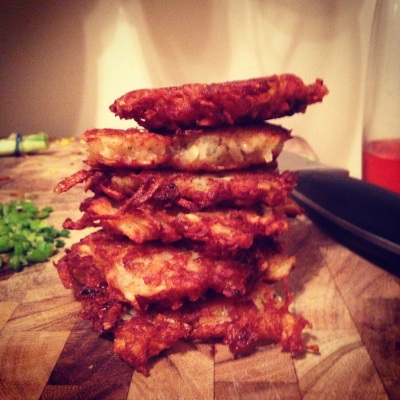 Peel potatoes. Grate the potatoes and onions using the large holes of a box grater or food processor. Using a paper towel ring out the moisture from the potato and onion mixture. Add eggs, baking powder, bread crumbs, salt and pepper. Mix well. Heat oil over medium high heat. Using a spoon drop a small amount of latke mixture into the pan and flatten slightly with a spatula. Cook for about 2.5-3 minutes per side. Place the latkes on a baking sheet lined with paper towels. Top with smoked salmon, sour cream or applesauce. Take a shower.

2 thoughts on “Latke Night In America (Support the Troops)”